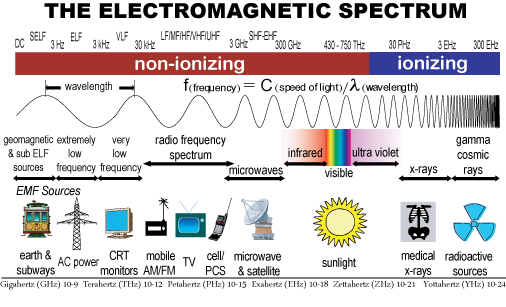 These EMF are also classified as non-ionizing and ionizing.  Ionizing EMF radiation can break chemical bond (cause cell damage) and is of immediate threat to health.  Examples of ionizing radiation are UV rays and X-rays.

EMF radiation can also be divided as Natural or Man-Made.

Natural Radiation can include the negative earth radiation generally classified as Geopathic Radiation or Geopathic Stress.

All EMF Radiation will have an effect on the human body.  The question is whether its a positive effect or a negative one, and to what degree.